Pictures of all the different versions of Nick's singles and his album promo.  If you're ever looking to buy a Nicholas Jonas CD or other rare Jonas CD, these are pictures of the real CDs*.  If you are looking at another CD, but are unsure of whether or not it's real, feel free to message us!  (Contact tab) We know which CDs are real and which ones are fake.

*You can see the fake CDs at the end of the page. Please remember that we make mistakes sometimes, so if you have any information about the CDs, do tell us! (contact tab)

NOTE: All of the pictures with the black background and tagged @LeoADion belong to http://myjonasbrotherscollection.webstarts.com/. Flickr and Youtube on the same name.

In 1992, Kevin Sr. released a solo cassette, Lessons In Love. The songs were said to be a "great country mix" and included 9 tracks: Lesson in Love, I Ain't Through Fallin' In Love, Love in Daddy's Eyes, Other Side of Town, New Day on the Horizon, Silver and Gold, When the River Runs Dry, Lonely Lady, Words of Wisdom, When God Looks at the Earth Does He See Me.

Some copies, if not all, were purchased from Kevin Sr. himself. 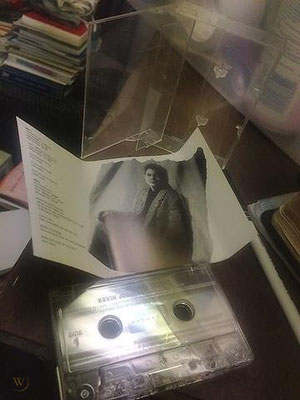 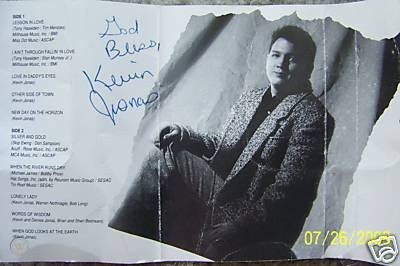 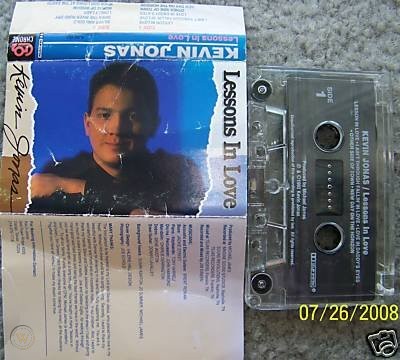 From 1993 to 1996, Kevin Sr. lead the Christ For The Nations Institute worships as a pastor, singing classic gospel songs along with original ones. Denise would share the stage with him along with others over the years. In 1996, after Kevin II had a scary accident at home, Kevin Sr. had the inspiration for the song I Am Amazed. So, at that year's worship, little Kevin along with a chorus of children from the church, performed the song live. Each worship is recorded in video and CD form.

The CD is available on iTunes and other sites for sale to this day.

After being the worship leader at Christ for the Nations in the early 90's, Kevin Jonas Sr. had left to become the pastor of Wyckoff Assembly of God, where he had once been the youth pastor. He was still writing songs, and wanted to continue recording, so they brought all of the gear and the musicians to New Jersey. They recorded at the Love of Jesus Church in Orange, because Kevin felt that his church auditorium was too small. In this CD, they put together a great band of some of the same musicians and singers that played on CFNI projects. 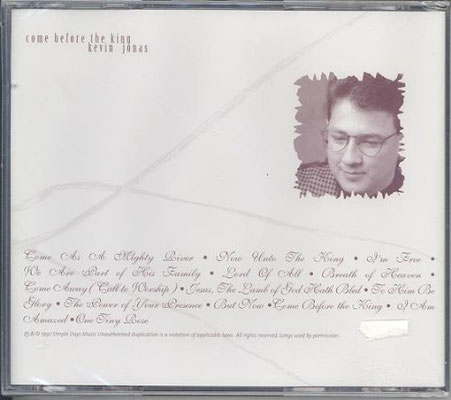 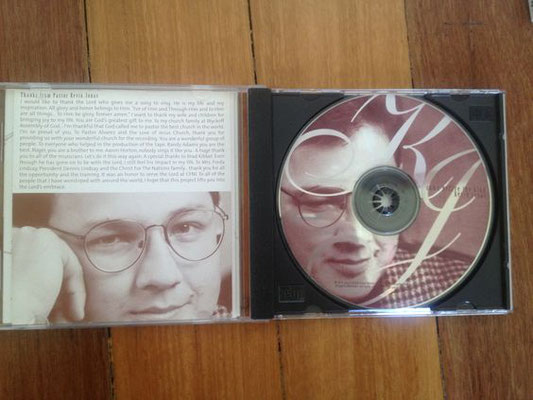 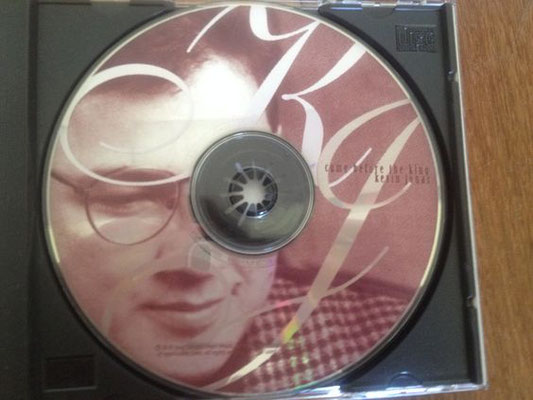 In 2002, while Nick was in Beauty and the Beast, he and his father were approached by producers of a Broadway charity album called Broadway's Greatest Gifts: Carols for a Cure.  They asked Nicholas to record a song for the album's 4th volume. The Jonas' accepted the offer and decided to write a song for the album, instead of singing a traditional Christmas song.  On the car ride home, Nick already had an idea for the song, which later turned into his first recording of Joy To The World (A Christmas Prayer).

It was Nick's very first studio recording. The song featured Nicholas as a soloist, and Mr. Jonas along with two ensemble members of Beauty and the Beast as background vocalists.

The entire album was recorded on 15th, 16th, and 17th of September, 2002 and the CD was sold the following holiday season.

In 2003, while Nicholas was in The Sound of Music, he recorded a new demo of Joy to the World (A Christmas Prayer), after someone who worked for a record company heard the first version. This new version was made into a single and given out at the Jonas's church as well as after shows, and sold on Nick's site.

In November that year, INO received a copy of this demo and with short notice, the song was in heavy rotation on the radio and Nick had a recording contract.This was also what he sang on his first televised performance, during that same Christmas season.

There were different released versions of this CD: the first had the red CD with Nick's headshot on it that fit into a white plastic case, and a "bare back". A second version had a white CD with little winter-y drawings that came in a black plastic case, and the back included extra pictures of Nick.

Nicholas' first single, Dear God, featured a song written by Carl Sturken and Evan Rogers and an intro by Nick explaining the song.  It was released on October 30, 2004 for promotional purposes.

Nick was asked perform the song before 600 United Nations delegates during a symposium on world healing in the age of terrorism, sang it live on The CBS Early Show, on November 6 2004, as well as in many other places.

There were 2 versions of the single: one included the song intro by Nicholas and was a "full" CD case, with the cool transparent CD and traycards featuring song lyrics and other info; the other version included only the song itself, on a simple black CD and the cover.

The second single, Joy To The World (A Christmas Prayer), was released on November 16, 2004 for promotional purposes. It featured a different track from the previous versions, the shortest of all, being only 3:59 long.

Nick's third single featured the song Time for Me To Fly.  It was released for promotional purposes, the date is unknown. Nick also sang this song with his brothers live on the Early Show's Second Cup Cafe on November 6th, 2004. (It was a great late-birthday present for Kevin!)

Time For Me To Fly, like Dear God, had the same 2 released versions:  one including a traycard with song lyrics and a transparent CD, and one in a simple blue color.

In 2004, after signing a record deal with Daylight/INO records, Nick began recording his solo album. The album featured 11 full-length songs, 8 of which were written by Nick in collaboration with family members and professional song writers. The album was fully mastered and a promo was sent to various radio stations and critics for review.

Eventually it received a very limited release, December 16, 2004, it seems, but was taken off the market very quickly.

Soon after, Steve Greenburg of Columbia records heard the album and liked Nick's voice, as well as the idea of having Nick and his brothers as a music group, and thus the band known as Jonas Brothers was born! Although back then, they were called the Sons of Jonas.

As Nick's promos were sent out to radio stations, Nick's song Dear God gathered popularity around October 2004, and ranked high in the charts for the last months of the year. In doing so, his songs were featured in various compilations, such as this one.

This is AIR's Futures Adult Top 40, October 2004 compilation, in a little Halloween flair.

At the time, Dear God was ranked consistently in the Top 5 for the category.

After Dear God, Nick's revised Joy To The World (A Christmas Prayer) was the next one on the radio, a Christmas hit for the second year in a row. Along with heavy radio rotation, the song was included in a compilation: K-Love's Christmas Collection, under the INO Records label.

This CD used the album version of the song, instead of the shorter single version. 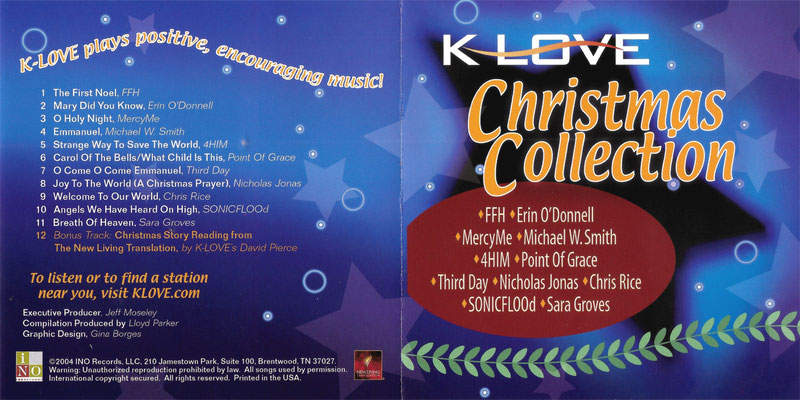 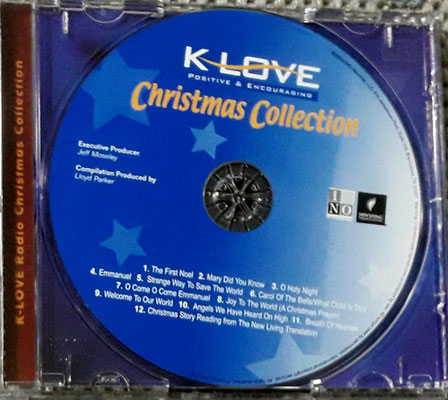 Around the time Nick's album was supposed to be released, one of his songs was featured in Darcy's Wild Life soundtrack, a kids show featuring Sara Paxton as Darcy. It originally aired in 2004-2005.

During the Jonas Brothers early years, another CD featuring one of Nick's songs was released. During the solo days, Nicholas was signed with INO records, a Christian company, which had released other compilations before.

Nick's song, Joy to the World (A Christmas Prayer), was a bonus track in the Christmas album. Released on October 3, 2006.

You can see the commercial here.